I Just had a shower, and, now that I have freed my feet from the shoes, I am starting to recover some sensivity in them. And that’s not good. Pain.

But it is worth it, because it has been for a good cause: the people from the Mi meta 42K running club organized a charity hike/run to the benefit of Rubén, a kid from Murcia that suffers from Spastic Paraparepsia (did I translate that right?). By the way: it would be nice from you if you stopped by his website, http://elcaminoderuben.com/ and made a donation :)

The goal of the event was to collect some money to help raise him by organizing a hike/run from Murcia to Archena’s Spa. An over 40 km long walk. Us, the hikers, started at 7:00 in the morning, and the runners started at 8:30, so that we could, more or less, arrive at the same time at the Spa.

I thought that I was fit enough to make it to the finish line and just be tired (ok, maybe extremely tired, but just tired). But I have been suffering for a great part of the way: just before making the 20th km, I started noticing how blisters were forming under my feet. 10 km later, a big blister on my left foot tore open, and I started limping and leaning onto my right leg, to compensate. Close to the end, around km 33, I stepped on a pointy stone, and hurt my left foot some more. So I leaned even more on my right leg.

As a result, at km 35, my right leg and ankle started hurting so bad that I even had to stop and stretch for a few minutes. My body was, in fact, asking me to quit. But I refused to do so, being so close to the end, and, step by step (very small steps, in fact), I made it to the finish line. And I am quite proud of it.

The good point is (besides helping Rubén) that, after resting and recovering a little, they raffled two ham legs. And they drew my number :D

It was just a minute after telling the man that was sitting by my side that “I am so tired that I almost can’t move my own body, so imagine if I have to carry a ham too”. But in the end I managed ;). 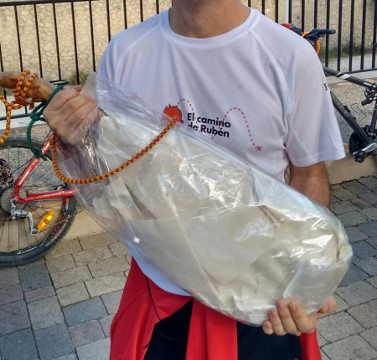 Me and the ham.